It’s a Monday evening in North Amherst, a stone’s throw from the University of Massachusetts, and a half dozen students are milling about the top floor of the North Fire Station, catching up on some homework. At 6:44, a loud tone goes off, and the conversation halts. After a pause, a voice blares over multiple speakers: “Attention Engine 2: Still alarm. Engine 2: Still alarm. Respond Shays Street. Multiple CO activations sounding. No signs of illness. Shays Street, CO activation, no signs of illness.”

“We’ll probably be going on this…,”says UMass senior Ledner Giron, a lieutenant in the Amherst Fire Department’s all-volunteer Student Force, also known as Engine-3 Company. He’s among the “Bravo” squad of six students that have just begun their weekly 13-hour shift. And even though the engine dedicated to their squad, Engine-3, has not been directly summoned, all the students quickly walk down to the truck bay, don their turn-out gear — and in less than two minutes, Engines 2 and 3 are headed south to the call.

There are several municipal departments throughout the country that accept college student volunteers, but Engine-3 Company, or E-3, stands out as an independent program. It averages 30 members divided into five squads and has its own officers, pump operators (drivers) and its own engine.

Six of those members, usually the most senior, live at the North Station throughout the school year. To join, applicants must maintain a 2.5 GPA, be physically fit and have at least two years of college remaining. Training is a big investment of time — for the recruits and for the current student force that trains them — and the department would like to make that investment last. But in the four-years-and-done calendar of the collegiate world, the clock is ticking.

The Student Force could be characterized as semi-autonomous, running its own day-to-day operations, including shift assignments and duties. But Amherst Fire Department Assistant Chief Lindsay Stromgren — who himself was a member of the Student Force back in the 1980s — does oversee the program’s twice-yearly recruiting and hiring.

He says that, from the get-go, the applicants are put on notice about the heavy time commitment that will be expected of them. After the initial training, members take on a weekly 13-hour overnight shift and a 24-hour weekend shift about once per month. There are also weekly trainings. Then, the week before classes start up again in the fall, all members, new and old, return for “Wonder Week,” six days and 60 to 70 hours of intense hands-on training, including live fire training. A stronger pool of applicants (about 48 this fall) helps with retention, but graduation always looms. As Stromgren puts it, “We’re constantly turning over — it’s the nature of the beast.”

The Student Force was established in 1953 to augment the town’s full-time department, first drawing from the student body at the University of Massachusetts, then later accepting students from Amherst and Hampshire Colleges. When a second fire station was built on the north end of town in the 1970s, its second floor was designed with the Student Force in mind, with its own kitchen, day room, permanent sleeping quarters for six members and a bunk room to accommodate another six students on rotating shifts. 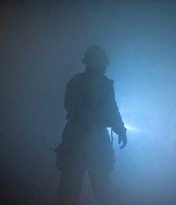 Engine-3 responds to every weeknight and weekend call to the UMass campus but also provides back up to many other fire and medical calls in town. It is often the first to respond when the town’s full-time force members are all out, tied up on other calls. That was the case in the early morning of Nov. 8, when Engine-3 was one of the first engines to arrive at the five-story Ann Whalen Apartments to a fire that displaced about 60 residents and later took the life of one.

Deputy Chief Paul Rhude, a UMass senior majoring in mechanical engineering, is Engine-3’s top officer and lives at the North Station. He was not on duty that night but heard the call, woke up the others — and they were some of the first responders to the scene. Three years ago, when Rhude first came to Amherst to attend UMass, he was so eager and ready to join the force that he first took part in Wonder Week before leaving from there an hour early to make it to his freshman orientation.

Rhude did come in with a slight advantage, having gleaned some fire training from his father, who had also served on the Student Force alongside Stromgren and who is now the fire chief in Cotuit, on the Cape. The younger Rhude says he joined to help the community and, in the process, “get a boatload of experience and meet some cool guys.” He remembers last February when the Patriots lost the Super Bowl and the Southwest dorms at UMass “went crazy.” There were scores of calls in a couple of hours, pulling the Student Force into action. “That’s the time when we really come into our element. We become super useful to the town.”

This fall, Rhude leads a total force of 23, including nine other officers. Wednesday evenings are set aside for training the new recruits. Last Wednesday, these 10 probationary firefighters practiced hose line drills near the North Station — pulling, connecting, charging and controlling the hose lines — in temperatures just above freezing.

Every Thursday evening is dedicated to more advanced training for the existing force members, often at the Arthur Hazard Dakin House, a vacant 1830s estate owned by Amherst College. Last week, they filled the house with smoke, actually a theatrical fog, and the force’s five squads, each with four or five members, took turns practicing search and rescue in zero visibility. At times, the haze becomes so thick that the light from a flashlight held three feet away just disappears.

Deep into the third hour of the training, after each squad has gotten a rotation on the five different drills, Rhude calls it a night. He sets up a gasoline-powered fan, old to the department but new to his squad, to evacuate the building of smoke, just as after an actual fire. The floodlights deployed high above the engines are retracted, everyone buckles in, and nearly as quickly as they arrived, the three engines desert the property, leaving it as dark and quiet as they found it.

And the CO call on Monday with no reported illness? The homeowner had come home to find all of the detectors sounding their alarms. All had been stamped seven years ago with the same date of manufacture and, as it turned out, all expired on the same day.

Kevin Gutting can be reached at kgutting@gazettenet.com.